Passive Voice: When is it the better choice? 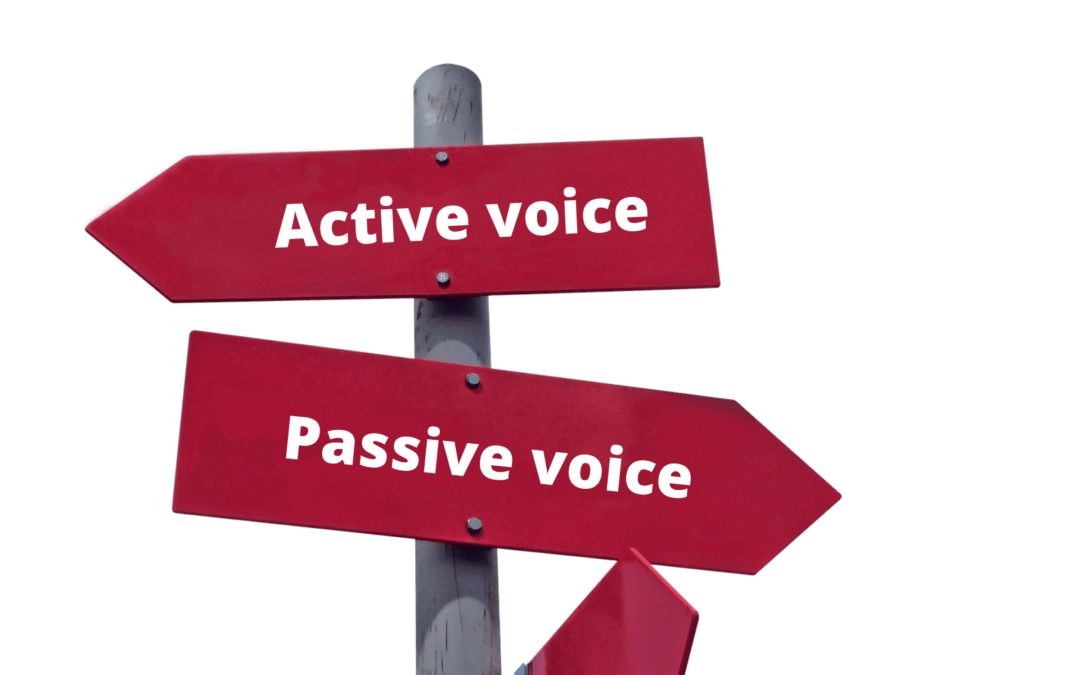 
Academic style guides such as APA’s Publication manual often recommend active voice in scholarly writing, but when is passive voice the better choice?

This blog post shows examples of both active and passive voice and suggests when passive voice might be the better choice. It includes a note on the use of personal pronouns I and we, offers tips for spotting passive voice in your manuscript and concludes with references and further reading.

The researcher performed a detailed analysis.

In this sentence, the grammatical subject — that is, the performer of the action (or the actor) — comes first (‘The researcher’), followed by the verb (‘performed’) and then the object (‘detailed analysis’). That is, the subject in this sentence is doing the acting.

A detailed analysis was performed by the researcher.

Here, the object appears first (‘A detailed analysis’) followed by the verb (‘was performed’), and the subject or actor (‘the researcher’) comes last. In passive voice, the focus becomes the object experiencing the action rather than the person performing the action.

Simply put, in passive voice, the object becomes the most important part of the sentence.

When we know who the actor is

Here are more examples of passive voice where we know who the performer of the action is. In each, if we wanted to rewrite the sentences in active voice, it’s easy to do so because we know who the actor is:

When the actor is unknown

In the next example of passive voice, however, I’ve omitted the actor:

A detailed analysis was performed.

In scholarly writing, not knowing who the actor is can cause confusion for the reader — in the above example, we are left wondering who performed the detailed analysis; was it the writer, or is the writer referring to another scholar’s research?

In the following passive examples, I’ve again omitted the performer of the action, followed by suggestions of how the sentences might be written in active voice — if we knew who the actor was.

Writing in active voice often necessitates using the personal pronouns I and we if you are the performer of the action (see the boxed note below right). Sometimes, however, we don’t need to know who the actor is — it’s not important — and this is discussed below.

Use active voice when you need to emphasise the performer’s actions and to create clear, dynamic and authoritative sentences.

For this reason, many style guides —such as APA — recommend active over passive voice. While APA Style permits both active and passive voices, it recommends active voice as much as possible ‘to create direct, clear, and concise sentences . . . and to describe the actions of participants and others involved in your study’ (see Section 4.13; APA, p. 118).

When is passive voice the better choice?

Although many style guides recommend active over passive voice, this should not be at the expense of good scholarly writing. Passive voice has its place, and in fact, it’s often the better choice. When might that be?

The object is more important than the subject

In a thesis or journal paper, this might be in the Methods section where you want to focus on the object experiencing the action rather than the person performing the action. That is, the object is the most important part of the sentence.

APA notes that passive voice is ‘acceptable in expository writing when focusing on the object or recipient of the action rather than on the actor’ (p. 118). It gives an example where you may be describing in the Methods section how an experiment has been set up:

The speakers were attached to either side of the chair. (APA, p. 118)

This construction emphasises where the speakers are placed rather than who did the placing.

When we don’t know who the actor is, or it’s not important

Sometimes, passive voice is needed for variation in sentence structure; too much active voice (‘I did this’ and ‘I then did that’) can becoming boring, and the last thing you want is for your reader to disengage from your writing. Active and passive voices should complement each other.

It’s too hard, or the result is inelegant and clumsy

If you’re finding it hard to make a passive sentence active, or the result is clumsy and inelegant, it’s probably best left as it is — in passive voice.

If you’re unsure whether passive voice is acceptable (or even preferred), check with an authority such as the academic style guide you’re following (e.g.  APA’s Publication Manual or the Chicago Manual of Style) or publisher’s requirements. If you’re writing a research thesis, ask your academic supervisor or faculty’s research office for advice.

APA on using personal pronouns I and we

In her book Stylish Academic Writing, Helen Sword (2012) discusses how social scientists often explain that they have been trained not to use personal pronouns I and we. When asked for the reason, they stated, ‘It’s because we’re supposed to sound objective, like scientists’ (p. 39).

Interestingly, Sword surveyed 50 articles and found that in every one, the scientists (in this case, evolutionary biologists) in her data sample used personal pronouns such as I and we, ‘while the higher education researchers, who write mostly about human beings, use[d] I or we only about half the time (54%)’. They argued that they were trying to take an ‘objective authorial stance’ (p. 39). In the humanities, 40% of historians used I/we in contrast to philosophers (92%) and literary scholars (98%).

APA advises against referring to yourself in third person (‘The researcher explored …’) or using the editorial ‘we’ (‘We often wonder about what other people think of us’; Section 4.17).

Fiendish tips to spot passive voice in your writing

A quick way to spot passive voice is to turn on your grammar checker in Word.

To do this, go to File > Options > Proofing, then tick the Mark Grammar Errors as You Type box. In the Writing Style drop-down menu, choose Grammar and Style, click on Settings, and tick the Passive Sentences box (see figure below).

Please do note, however, that Word’s grammar checker (and spell checker) can sometimes be wildly inaccurate, so please don’t rely on it too heavily. While helpful, no computer software can replace a professionally trained copyeditor!

A detailed analysis was performed [by zombies].

Active voice is more direct and gives your writing authority and purpose. However, passive voice is often necessary and the better choice — that is, when the object is more important than the subject, when we don’t know (or it’s not important) who the actor is, and for elegant sentence structure and balance.

If you’d like to receive Devilish Details blog posts as soon as they’re published, sign up by adding your email address to the ‘Follow’ box in the side bar. I tend to publish a new post every few months, so I promise you won’t be inundated!

How to eliminate wordiness: 7 fiendish tips for clear, succinct writing