How to Eliminate Wordiness: 8 Fiendish Tips for Clear, Succinct Writing 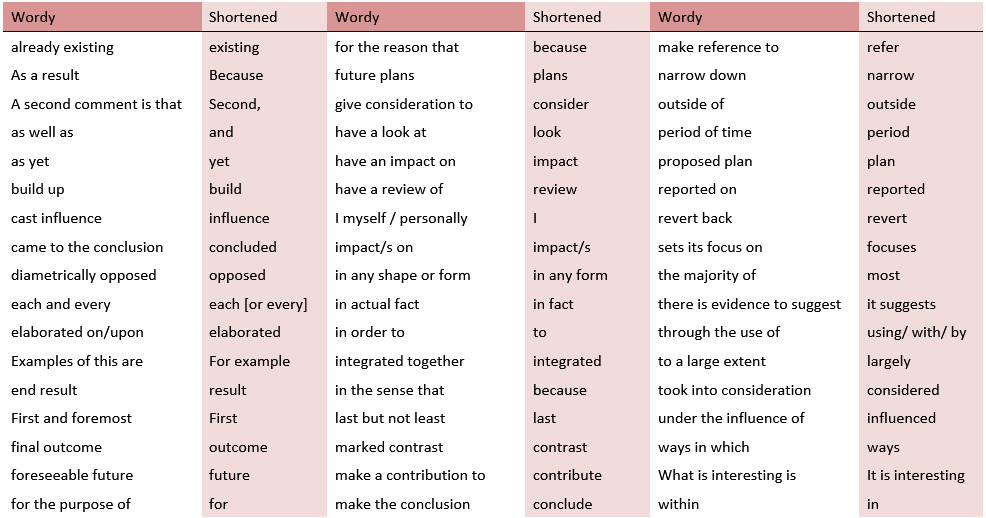 Writing clearly and succinctly is important for communicating effectively to your intended audience, and to do this, economy of expression is key. Writers tend to worry, however, that cutting words from their manuscript will result in boring text devoid of voice.

So how do you reduce wordiness in your scholarly writing without removing your personality? Here are eight fiendish (and simple) tips for eliminating wordiness, resulting in clear, succinct writing.

1. Write in active voice, rather than passive

Voice expresses whether the subject in a sentence acts (active voice) or is acted on (passive voice). Active voice is more direct and gives your writing authority and purpose. Passive voice, on the other hand, can make your writing seem long-winded and unconfident.

‘A detailed analysis of each interview was undertaken’. (Passive voice)

‘I analysed each interview in detail’. (Active voice)

A fun way to spot passive voice is to follow the verb with ‘by zombies’. If you do this, and it makes sense, you’re probably writing in passive voice. So when we add ‘by zombies’ to the example shown above, we can easily spot the passive voice:

‘A detailed analysis of each interview was undertaken by zombies’.

Another way to spot passive voice is to turn on your grammar checker in Word. To do this, go to File > Options > Proofing, then tick the Mark grammar errors as you type box. In the Writing Style drop-down menu, choose Grammar and style, click on Settings, and tick the Passive sentences box (see figure below).

NB: Word’s grammar checker (and spell checker) can sometimes be wildly inaccurate, so don’t rely on it too heavily. No computer software can replace a professionally trained copyeditor!

A note on passive voice in academic writing

If you’re unsure whether passive voice is acceptable (or even preferred), check with an authority such as the academic style guide you’re following (e.g. APA 6th or the Oxford Guide to Style) or publisher’s requirements (if you’re writing a journal paper, chapter or a book). If you’re writing a research thesis, ask your academic supervisor or faculty’s research office for advice.

See my related blog post for a more detailed discussion: Passive voice: When is it the better choice?

Like adjectives, adverbs add information. But while adjectives modify nouns and pronouns, adverbs modify verbs, adjectives and even other adverbs. They do this by answering ‘how’, ‘why’, ‘where’, ‘when’ and ‘to what extent’.

How to spot adverbs of manner or degree

It’s difficult to tell just by a word’s appearance whether it’s an adverb, but adverbs of manner and degree often end with ‘-ly’ (for example, ‘hopefully’, ‘greatly’, ‘extremely’, ‘highly’), so watch out for them as you go through your manuscript. (But note this isn’t a hard and fast rule, for example, ‘very’, ‘quite’, and ‘almost’.)

Look at each example below, and ask yourself, ‘Does the adverb add anything to the sentence?’

‘This research hopefully addresses these concerns’.

‘The results of the analysis are extremely significant’.

‘The participant was very/quite adamant’.

In most cases, you’ll find your sentence retains its meaning without it.

Conversely, if you’re short on word count, don’t be tempted to pad out your writing with adverbs of manner and degree! Instead, ask ‘Is there something more I should be saying?’

3. Rewrite sentences starting with ‘There is’ or ‘There are’

Look out for sentences starting with ‘There is’ or ‘There are’ as you can often rewrite them for more clarity.

4. Recast ‘of the’ constructions as possessive

Overuse of ‘of the’ in a sentence can result in sluggish writing, which can interrupt the flow. This can simply be fixed by recasting as possessive.

‘Stories of the Elders’ can be recast as ‘Elders’ stories’.

5. Avoid overuse of ‘that’ in a sentence

I’ve found in some scholarly writing, authors often overuse the word ‘that’, which can make a sentence seem long-winded and unwieldy. You can see a couple of examples of how to eliminate ‘that’ in point 3 above; here’s another example.

‘The participant stated that she felt that she needed to carefully plan her lessons to ensure that her questioning techniques were improved’.

If we remove the three occurrences of ‘that’ (and while we’re at it, let’s remove the adverb, word repetition and passive voice), we get the following:

‘The participant stated she felt the need to plan her lessons to ensure she improved her questioning techniques’.

Too many nouns in a sentence can cloud your meaning. Shorten phrases by drawing the verb from the noun.

‘I will take into consideration …’ becomes ‘I will consider …’

More examples are in the figure in Fiendish Tip 7 below.

7. Resist rewriting data presented in a table or figure

This tip may seem obvious, but it’s actually quite a common temptation to rewrite data contained in a table or figure. Instead, it’s sufficient to refer simply to the source.

Finally, to help you in your quest to write clearly and succinctly, I’ve compiled a list of phrases I frequently come across in scholarly writing that can be shortened and retain the same meaning (see figure below). Do any of these appear in your manuscript?

If you’d like to receive Devilish Details blog posts as soon as they’re published, sign up by adding your email address to the ‘Follow’ box in the side bar. I tend to publish a new post every few months, so you won’t be inundated!

Passive voice: When is it the better choice?